Amazons: The Dora Milaje, The Valkyrie, and The Night Witches

“Their women ride horses and shoot arrows and hurl javelinas from horseback and they fight in campaigns as long as they remain virgins… They have no right breast since their mothers heat a specially made iron… and apply it to the breast while they are still children. This prevents the breast from growing, and all the strength and size of it go into the right arm and shoulder instead.”

They stunt the feminal reproductive organ growth, and with a curling iron, no less. Farewell, gorgeous top with the plunging neckline. Unless, of course, mono-boob is trending this season.

Multiple narrations exist of the army of beautiful and valiant Amazon women. They brandish javelins, launch arrows, and ride horses. According to Greek legend, they live on the paradise island of Themiscyra (watch Wonder Woman and swoon at the landscape) where a strict gurls-rox! policy applies. They raise daughters to be warriors, and kill their baby boys. How do they even conceive? Well, sperm is courtesy of neighbouring tribes or captured prisoners.

AND, they chop boobs… or do they? John Man sets the account straight. 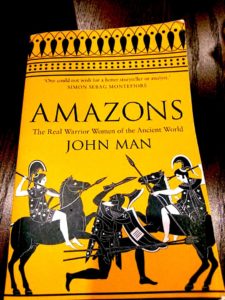 In his book, Amazons, Man delivers a detailed analysis of the Greek myths, the legends, and archaeological discoveries. He then reveals the existence of these real-life warrior queens: the Scythian women.

While evidence of Greek-mythology-aligned Amazons is lacking, these Scythians are very real. They hail from Central Asia and formed three dynasties over a span of 1000 years: in the region of Kuban River, Between the Don and Dnieper, and in Crimea (Man, 2017, p37). The Scythians and Greeks came into regular contact for commercial reasons.

Now, the patriarchal Greek society was aware of the out-and-beyond land outside Greek territory, along the Southern shores of the Black Sea. But it’s inhabitants were a mystery, so their minds play tricks on them, filling the blanks with a tribe of ferocious bad-ass women, for what was more intimidating to male chauvinist pigs if not strong, untamed women (Man, 2017, p5)?

So when they meet women warriors that satisfy their concept of the mythical Amazons, their suspicions are appeased.

“… One of the tribes- probably a confederacy- was the Massagetae, whose way of life fed into the Greek belief in a nation of Amazons. Kumiss-drinkers drinkers known for their sexual equality- shocking to the male-dominated Greeks and Persians- the Massagetae fought on horseback with battle-axes and bows, men and women alike. At the time, they were ruled by a queen named Tomyris.” (Man, 2017, p38) 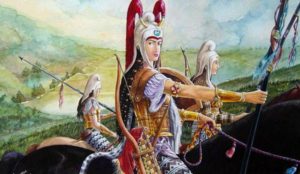 These Scythian women yield swords and canter horses. They brave battles and slay countless. They do kumiss shots and behead anybody that dare cross them. (Persian king, Cyrus caused the death of Queen Tomyris’ son. Oooo… bad move, brother)

John Man reveals that although Wonder Woman (an Amazon per story) and her merry band of Amazon race do not exist, warrior queens that fit the Amazons’ description do- the Scythian women. However, the appeal of the Amazons were their women-exclusive composition. Although these Scythian women were freaking mind-blowing forces of nature in their own rights, they belonged to and commanded armies of all genders.

There is something so perplexing and bewildering about a team of women who are defined not by the cup of their boobs or the waves in their hair, but by the ferocity of their roar, the tenacity of their spirits, and that mean right hand hook.

Here are three groups of women-only troops: one fictional, one real, and another realism-based fiction.

THE DORA MILAJE (fiction based on real events)

Do we remember the bald, fearless and gutsy Dora Milaje from Black Panther and Avengers: Infinity War? These Dora Milaje were task with protecting the king and nation of Wakanda. They went head to head with Killmonger in Black Panther, then braved the frontiers when Thanos and his ill-informed jakuns attacked Wakanda.

They are believed to be based on the Dahomey Amazons (or N’Nonmiton, which translates into “our mother”) of present day Republic of Benin. In fact, the last surviving Dahomey Amazon passed at 100 years old in 1979. 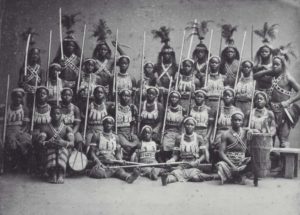 These warriors swore to protect their king. They under went some serious Spartan Race type training, jumping over thorny walls, spending days in the jungle with nothing but their machete, and conditioned to fight till death.

Their status as semi-sacred elite soldiers earn them mad respect. Not even the king dared challenge their celibacy vows. During the French expansion in Africa during the 1890s, uniformed French soldiers who attempted to bed Dahomey women were often found with slit throats the next morning. In fact, when these women leave the compound, they were preceded by a slave girl ringing a bell, informing every male to clear the path and look the other way.

The training to become a Dahomey soldier will kick your ass. However, women were presented the opportunity to rise to power and position, with significant roles in the grand council, and a say in public policy. They could live as single, independent women on the King’s compound with a boundless supply of supplies, alcohol and tobacco. Worth it huh?

THIS is the epitome of feminism. But then again, they serve the King, a man.

According to Norse Foklore, Valkyries are assistants to the god Odin. They are charged with the mortality of those in battle. In other words, they get to choose who lives and dies- a Norse’s own “angel of death”, if you will. According to the poem Darraðarljóð, the Valkyrie set up a loom where “men’s heads were the weights, and men’s entrails were the warp and weft, a sword was the shuttle, and the reels were the arrows.” Shivers.

Naturally, I prefer Marvel’s version of the Valkyrie, first introduced on the big screen in Thor: Ragnarok.

The creators of Thor: Ragnarok certainly has guts. To write into a $180 million production a coloured, alcoholic, female, bisexual, heroine character is no task for the vagina-less (fact: vaginas are tougher than balls). 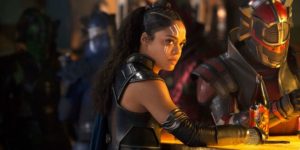 I’m talking about Brunnhilde the Valkyrie. The misunderstood, rough around the edges, my-best-friend-is-a-bottle ex-warrior.

She meets Thor through a series of cinematically entertaining events and they go on to achieve heroic feats.

But screw Thor. This is a (mostly) Bechdel Test- compliant piece. Instead, let’s talk about Brunnhilde’s late comrades, the Valkyrie.

“My God, you’re a Valkyrie… You know, I used to want to be a Valkyrie when I was younger, until I found out you were all women. There’s nothing wrong with women, of course, I like women. Sometimes a little too much. Not in a creepy way, just more like a respectful appreciation. I think it’s great, an elite force of women warriors. It’s about time.” -Thor to Valkyrie

One day, Odin sent the Valkyries to face off his daughter and former executioner, the big bad Hela. Hela unleashed a rain of necroswords and proceeded to massacre the Valkyries in a series of dramatic events. That faithful day, all but one Valkyrie perished—Brunhilde. That marked the end of the Valkyries.

However, despite their annihilation, the Valkyrie is undeniably impressive. An army of oestrogen-charged, impeccably trained fearless women entering battle on Pegasus backs? Wow!

Maria Raskova became Soviet Union’s first female navigator at age 22 (Man, 2017, p217). The Russians love a hero(ine), and what’s more heroic than a female aviator. In September 1938, an attempt was made for a record to fly non-stop the length of Mother Russia, a total of 6500km. Two female pilots and Maria as navigator set off in a long range bomber, Rodina.

But events took a bad turn (Man, 2017, p218). Bad weather, lost of radio communication, and low on fuel, in that order, led to Maria’s ejection from Rodina. She landed safely, but way off base. She lived on chocolate, berries and mushrooms, treading on her injured leg before finally locating her plan wreck 10 days later.

At the point of the crash, Rodina had flown 5947km- a world record.

When the three women were finally rescued, Soviet Union roared with joy and delight. They were made the first women Heroes of the Soviet Union. The public adored Maria, with her extraordinary survival story and stunning good looks, not to mention her bestselling book, Notes of a Navigator. 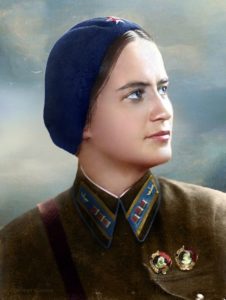 And then in 1941, German bombers attacked 66 Soviet aerodromes. Mother Russia was under attack. It was war.

Many female pilots wanted to fight, to serve their country. So, Maria founded a regimen of women military pilots. She had a direct cable to the top. However, the country leaders, Stalin included, were reluctant to send women into combat. “You understand, future generations will not forgive us for sacrificing young girls,” Stalin said. (Man, 2017, p219)

But Maria Raskova was not one to back down. Famously known for her toughness and stubbornness, she argued and argued till the Defence Ministry finally gave their green light. Hence, was born the world’s first women’s combat aviation unit- the 586th Fighter Regimen, 587th Heavy Bomber Regimen, and 588th Night Bomber Regimen.

Maria got the girls standard issued uniform- oversized boots and overcoats. (This part reminds me of my initiation into the airline. At that point of time, there were around only 10 female pilots in the airline, less than 5% of the total pilot count. The company issued me the smallest uniform they had in stock, and I spent a few years walking around like a kid in oversized hand-me-downs. A lot has change since. We now have customised uniforms with female-specific cuttings. I consider this a testament of female progression in the Malaysian aviation industry.)

For the female aviators, military life had just began. No shampoo, no toothpaste, no socialising with boys, and no bras or panties. These women had to sew underwear from the silk of torn parachutes.

The 586th and 587th regimens had male mechanics and administrators. Therefore, the only purely women regimen, consistent with our Amazon theme, was the 588th Night Bomber Regimen, led by commander Yevdokiya Bershanskaya.

The 588th Night Bomber Regimen’s job was straightforward- “to harass the enemy, to deprive him of sleep and rest, to wear him down, destroy his aircraft on his own airfields, his fuel depots, his munitions and food supplies, disrupting transport movements, hindering the work of his headquarters.” And the women kicked ass (Man, 2017, p224).

Galina Brok-Beltsova, a member of the 588th Regimen said in a 2016 TV interview: “We were all sportswomen, with good coordination… We were fit, in control of our bodies. But most of all we had the will to win, and we were a community”.

The Germans hated the U-2s these women were flying to torment them. They were constantly blowing up assets and leaving in their wake a blaze of destruction. When the Germans eventually discovered that their torturers were women, they refereed to these women as Nachthexen- Night Witches.

These women make one thing clear: fighting spirit, discipline and courage are not gender-specific.

Women, when given the same opportunities as men, exhibit identical characteristics, even if the feat is achieved in parachute silk.

Am I Normal Yet?: The Cruxes
Lazy Flights