Candy Andy: The One That Got Away

Why poke the sleeping tiger? Why rock the boat on calm waters? Why stir the pot of settled porridge? Why throw marbles under the steady jogger?

Why bring Candy Andy back and upset the perfect balance of bliss, endearment and sweet kisses? 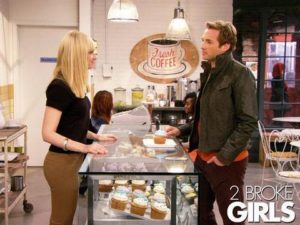 My ship on 2 Broke Girls sailed in Season 2 when Caroline and Andy (nicknamed Candy Andy because of his candy store) got over themselves and started sucking faces. Andy was the perfect poster boyfriend. He made her laugh, forgave when she budged in to him on a toilet bowl, blah blah blah… And then they broke up. I slipped into a plane of melancholy and despair.

But my hope for a reunion never dwindled.

Then in Season 5, the flame of hope blazed into a bush fire of hope when he strolled passed the girls’ cupcake window and back on the show…

And then he was gone again. Like he never returned.

After two stages of grief: denial and depression, I decided it’s high time for stage 3: acceptance. Surely, there are other fishes in the sea.

And along came Bobby. 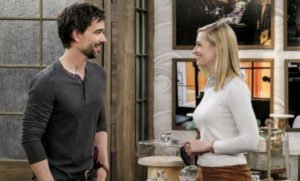 He’s loving, understanding, and adores Caroline. So I thought, yeah, why not?

I’m starting to dig the chemistry. Maybe I could live with a Bobby and  Caroline junior, running around, eating nose poop, drooling buckets…

When Candy Andy materialises like a phoenix from the ashes in Season 6. Cute, broad shouldered, and SINGLE. And he wants Caroline back. But Caroline has a boyfriend, Bobby.

The New Girl Jess-Sam nostalgia is thick in the air.

A decision I do not condemn.

As the Season 6 finale played without a Candy Andy reappearance, I wonder if history will repeat itself. Will he fade into non-existence? Has he vanished within the same breath that he appeared, never to be seen again?

Is he the one that got away?

I Heart Melbourne City
Reflection of the “Dentist Pilot”