“Call again downwind Runway 02,” instructs the ATC controller. After two hours of VFR (Visual Flight Rules) navigation, we approach our destination of Tioman Island. I examine the shoreline where the aquamarine sea meets the isle. Save for a thin belt of circumferential sandy beaches, thick flora overlay the island over varying elevations.

Where’s the airstrip? I crane my neck for a clearer view.

And then I spotted it. Nestled at the foot of a hill is a unidirectional airstrip. 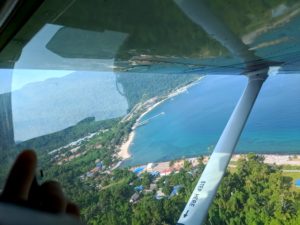 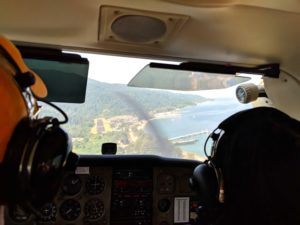 Over the years, I’ve heard of THE Tioman approach. To land, a pilot flies crosswind towards a looming mountain range, followed by a sharp 90 degrees turn to join finals. Once below 500 feet, there will be no missed approach. Due to the surrounding high terrain, one is committed to land. Any action otherwise means a definite pancake against a craggy mountain.

Fun fact, several sources list Tioman airport among the scariest in the world.

After all these years, I witnessed the nerve-wrecking approach that is equal parts scary and exhilarating. When the aircraft dip below 500 feet, I momentarily held my breath. But Captain Sebastian made it look easy, cool as a bowl of cendol, touching down at the threshold with a gentle thud- .

Safely on the ground, I thank Captain Sebastian. Then, Zel and I turn our focus towards the reason we risk our lives flying here for- the deep blue ocean- to earn our AOWD license (Advanced Open Water Dive).

I won’t lie about that knot in my stomach- apprehensive anticipation. 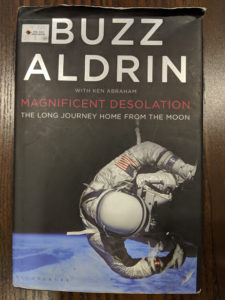 Buzz Aldrin’s second autobiography, Magnificent Desolation, describes his love for scuba diving. On Earth, he writes, only water can expose us to the sensation of weightlessness outer space holds. That’s why astronauts spend lengthy stints underwater training for future eventualities.

The feeling of weightlessness, he continues, is second to no other. It brings him a sense of euphoric joy.

His sentiment lit a resolve in me- to experience that enigmatic buoyancy only liquid-submersion can bring- (and since I like oxygen at my disposal at all times) scuba diving.

The process starts with theory lessons across the Federal Highway from Petaling Jaya (in Subang). The textbook is comprehensive enough. Each chapter ends with a review test, nothing an averagely-academic-person can’t handle. I like it when institutions idiot-proof learning material this way; the answer to every question is within the pages.

It’s reprogramming 28 years of learned instincts, as I discovered the very next day during confined water training (also in Subang).

Since birth, our minds are engineered to breathe on land. Inhaling underwater means flooded nostrils and water in the lungs- or so it’s ingrained in our subconscious.

As such, my first breath (via regulator) underwater was breathtaking (yes, pun totally intended). My neurotransmitters fire overtime. This is wrong! This is different! This is exhilarating! This is…

My pulse raced beyond acceptable limits, not that I checked, being preoccupied with breathing and all.

I tried my best to calm down.

Eventually, I improve from exorbitantly frantic to moderately frantic.

Of the several skills we are required to learn, I rate mask clearing scariest. For this skill, water is allowed into the mask. Next, with a tilted chin, pull the mask slightly from your face and blow hard through your nose. The force should clear the mask, and I aboslutely understand the utility of this skill.

But then, for the advance version, more water is allowed into the mask. In fact, the entire space between my eyes and mask is flooded with cool aqua. Opening my eyes confirms certain agony.

Now, my sense of sight is tied intimately with my sense of security. Lost of the former renders a frenzy of the major kind.

Panic sets in one more time, gushing through my veins. I’m freaking out. Chill, CP, chill, I coax myself. People say pilots are control freaks, but I think nobody likes to be removed from their comfort zone.

My heart struggles to relax, but the mind is still in full flight or fight mode. Breathe, CP, breathe. I’ve read enough material and spoke to enough people to understand that this is completely normal. Unfortunately, normal doesn’t make the experience any less harrowing.

Speaking of harrowing, I spent 3 weeks obsessing over CESA (Controlled Emergency Swimming Ascend). Basically, CESA is what you do if oxygen is depleted, your buddy is distant, and you are far-ish from the surface. In a situation like this, there is not much to do other than charge for the surface with whatever oxygen is left.

During confined water training, we simulated the scenario horizontally in the pool. However, in the open waters, we perform it vertically, like one would when actually oxygen-deprieved. According to PADI standards, take 3 large gulps of air. On the final puff, propell upwards slowly while making an aaahhhh sound. This is done all the way to the surface with a single breath of air.

Initially, I couldn’t figure out the preceeding two mouthfuls of air. Why waste oxygen? Isn’t it wiser to reserve some in case I misestimate my aaaahhh and require a refill mid-ascend?

The answer epiphanized during my viewing of Mission: Impossible- Fallout. 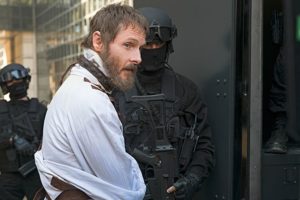 Solomon Lane, as a prisoner, is transported via a high security van- chained and bonded. A series of, er, interesting events land the vehicle in a river, with Lane still tied up and no means of escape.

Just as a deluge of water pours into the van, promising to drown him, he takes… you guessed it…

Here’s when I reasoned that the initial two breaths are to maximise his lungs and oxygenate his blood. (Right? I think.)

Anyway, the real thing wasn’t as terrifying as the nightmare I mentally cooked up, but I won’t deny the bubbling surge of felicity I felt when the dark waters brighten from sunlight and my hands pierce the water surface. 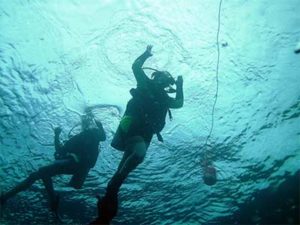 CESAs and mask clearing aside, I learnt a couple of facts en-route my AOWD license.

Fact One: It should be freezing underwater, but it wasn’t.

I hate the cold. “I have Malaysian skin”, I often say. This might also explain my habit of turning the cockpit into a freaking sauna. Yet, I barely felt any chill underwater, even when others did. I reason that all my energy was spent fuelling my fight or flight responses.

I learnt not to ask “how deep are we going?” The psychology of it simply isn’t conducive. However, when a line is attached, consider that a tell tale sign that we’re going deep.

One hand on the rope, the other equalising the cavities in my head (I learnt the importance of equalising the hard way), I ease myself into a gradual descend. As we distant the surface, light reduces. Our surroundings dim, bringing forth an aura of mystery. What are we going to find? So exciting!!

Fact Three: My instructor is solid.

Orange flippers = Safety. I keep my eyes firmly train on her orange flippers always. As a safety-freak who thrives on procedures, I’m telling you, Mel is legit. She teaches the procedures with judicious precision and responsibility. Not to mention her unhuman ability to swim effortlessly against crashing currents. I strongly recommend her to anybody seeking an underwater adventure.

Fact Four: I’m not as apt at multitasking as previously assumed.

Turns out, you can’t paddle and pee at the same time.

Fact Five: The laws of sight and hearing is different underwater.

I rather not to be held responsible for murdering any marine life. Therefore, many times have I paddled frantically at the closing of a particularly pretty coral, rolling and kicking in an effort to preserve Mother Nature, only to discover that said coral is beyond limb-width. Everything looks closer underwater.

Boats and their roaring engines do no favours either. Their rumbling sound like the background music of a James Bond movie, even from 20 metres underwater. Sound travels further in liquid.

Fact Six: Diving is an amazing way to make friends. 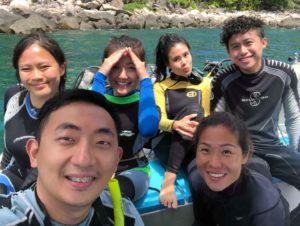 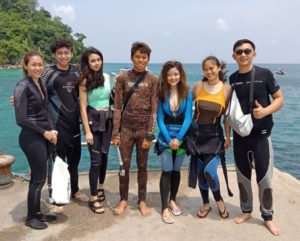 True story. When you traverse choppy waters in cat suits and metal cylinders together, you tend to forge bonds. I’m grateful for the laughs, the beers, and that enjoyable discussion of the word “yamateh”.

Fact Seven: The frenzy does end.

My initial apprehension morphed into wonder and bliss.

The underwater world unfolds itself with dazzling allure. Schools of fishes glide by, Mel points out sea eels, urchins and sting rays. The corals glister with splashy colours, flaunting yet serene.

The underwater world is unparalleled to any beauty I’ve ever witness sea level up. Its contents are teeming with life, bursting with spirit; and now I have front row seats- not through the glass of an aquarium, or the screen of my laptop.

As I drink in my ravishing surroundings, I think of Sylvia Earle and her famous quote: No water, no life; no blue, no green.

There’s a Dead Bird on the Runway in Langkawi
Jo and I Travel: Nha Trang with a “H”