Oops… I did it again. I binge watched nearly 3 seasons of chick flicks … got lost in the show…

The case in point is Crazy Ex-Girlfriend, a musical series, and here’s a rapid fire about our heroine, Rebecca Bunch:

“She was working hard at a New York job making dough but it made her blue, one day she was crying a lot and so she decided to move to… West Covina, California! Brand-new pals and new career. It happens to be where Josh lives, but that’s not why she’s here…”

Rebecca moves to West Covina, home of her childhood sweetheart- Josh Chan– that cruelly dump her last day of summer camp many years ago. Despite her initial denial, we all know the truth- she’s in West Covina for Josh.

Not long later, she discovers that Josh has a girlfriend- Valentia. However, this plays no deterrence to her affection and constant seduction of Josh. This flagrant dismissal of Valentia as Josh’s girlfriend leaves a nasty taste in my mouth, much like Emily Griffin’s book Something Borrowed, where the heroine (?) shamelessly steals her best friend’s fiancé. Of course, Emily portrays the best friend as “manipulative”, and the supposing antagonist. But perspective is a powerful fulcrum, and protagonist is just one viewpoint tweak away from antagonist. 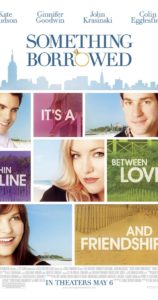 Similarly, Valentia is painted as mean, and unappreciative of Josh, as if that somehow justifies Rebecca’s pursuance of a taken man (although it is interesting to note that Rebecca and Valentia eventually become good friends). Some, in the spirit of hedonism, might applaud Rebecca’s pursuit for love and happiness, but I am substantially troubled. I consider Valentia the victim.

Anyway, Rebecca eventually realise the err in her ways, which she express through the song I’m the Villian in My Own Story:

But even after her warm for Josh is over, her man-stealing days aren’t. She had a committed relationship with Nathaniel, her boss-turns-enemy-turns-boyfriend-turns-ex-turns-co-boss-turns-F-buddy, that she eventually breaks off for mental health reasons. He gets a new girlfriend, but Rebecca and Nathaniel continue to bone… and bone… and bone for another 8 months. At one point, she even laments that this affair is the healthiest relationship she ever had, an attestation that she harbours no remorse about banging another girl’s man. But does her unstable mental state give her a free pass? I don’t know.

The narrative doesn’t frown on infidelity. I love Rebecca and Crazy Ex-Girlfriend, but this element is questionable.

“I’m just a girl in love, I can’t be held responsible for my actions… I have no underlying issues to address, I’m certifiably cute and adorably obsessed… they say love makes you crazy, therefore you can’t call her crazy… when you call her crazy, you’re just calling her in love!”

Rebecca Bunch is a feminist, there’s no question about that, and the show has an underlying feminism theme.

What? The girl who ditched her lucrative city job, zapped across the country, relocates herself, purely for a guy, is an advocate for female empowerment??

Feminism has been redefined over the years, the by-product when scores of opinionated women roar (I am woman, hear me roar!). Humour my brand of feminism, when I say it’s one’s freedom to choose. The power to marry or not, have kids or not, cook or not, wear yoga pants or not.

To phrase it differently, a woman may say “I choose to be a stay-home mum, not because of society’s definition of woman, but because of my personal decision to concentrate on my family,” which is worlds apart from “women should stay home to clean, cook and care for the kids on pure virtue of their gender”. Also, “I need a man to provide for me” is vastly different from “we have our individual role to play in this relationship, independent of our respective gender”.

Therefore, I support, applaud, even, Rebecca’s right to, yes, bolt across the country, desert her conventionally-defined success, in hopes of reigniting the spark she once shared with her ex-boyfrined from 10 years ago.

On a side note, there is nothing weak or antifeminist about loving someone who doesn’t love you back. I adore how Louise Brealey blunts it out. After backlash on her character, Molly Hooper‘s unrequited love for Sherlock Holmes on Sherlock, she tweets: 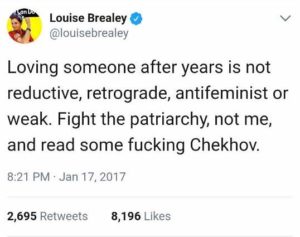 “Loving someone after years is not reductive, retrograde, antifeminist or weak. Fight the patriarchy, not me, and read some f****** Chekhov”.

Not that Rebecca is not madly in love with Josh Chan, of course, more like passionately obsessed. But her mental health is not the point here (important issue as it is), rather we emphasise on women’s journey for the sweet spot.

Consistent with a woman’s right to decide, is her journey in search for her individual ideal. We don’t want armies of empty-headed feminine warriors. Instead, we yearn for platoons of strong, independent women, whose decisions are made from rationalisation, and not directly influenced by society’s expectations. For the ability to think, rationalise and make decisions, are the foundation that will prop up the feminist movement.

And to arrive there, one must journey, search, make mistakes.

To quote Huffington Post, “Crazy Ex-Girlfriend is doing something far more complicated than simply ironically reclaiming, or accidentally reinforcing, a sexist insult: It’s limning the gap between how far women have come in our ideals and expectations, and how far society has actually progressed. Rebecca is a bad feminist, in the Roxane Gay sense; she holds feminist beliefs, and can easily articulate them, but her entire social self is at war with her ideals. She wants things she knows a feminist “shouldn’t,” and she admires qualities she knows define traditional femininity.” (Or as Holly Bourne calls it- cognitive dissonance)

I’ll spare the Megillah and lay it down: I ship #grebecca (Greg and Rebecca) so hard, sigh- shit show though, their relationship was. First, she “whores” (her words, not mine) herself to him at Bean’s party, in an attempt to locate Josh.

Finally, she offers him a pitiful minute and agrees to a date, after this very sexy rendition of Settle for Me:

The date is great, so swell (even if not perfect) so she HAD to wreck it by claiming banging rights with another guy. Get this right: she ditched Greg during their date, and brought home another guy to screw.

But Greg eventually forgives her- speak of amazing in a flannel shirt.

Later, she discovers how much he cares about her, and hence began a series of marathon sex. So much sex, actually, that she contracts a UTI (Urinary Track Infection):

And because people in general suck at keeping sex and love separate, she (alas) falls for him!

And then complications knock. Josh and Valentia break up, and Rebecca gets a bite of the forbidden fruit- Josh.

What’s a girl to do when she’s stuck in between men?:

But he producers intend to write Greg off, and they do- he hops on a plane for Evory. When Santino Fontana (actor that portrays Greg) left Crazy Ex, I was miserable. Crushed. Dejected. Grief-stricken.

So now, Greg is gone, and only Josh remains- convenient for the producers’ plan to rid all love triangles.

Please, anybody but Josh, I pray (my personal opinion, which is surprising, given my staunch support for Asians in Hollywood). It’s nothing personal, only that Rebecca needs a man with backbone, which Josh seems to pathetically lack- partially due to his pattern of serial monogamy.

Oh, what does the future hold?

… And then they spring Nathaniel on us. (He’s the one in the middle.)

P.S.: I don’t blame you for watching that video on repeat. Not that I did. Ahem.

But can six packs extinguish the Greg torch?

Mulu, Sarawak: Of Cave-Hopping and Spelunking
I Farted On Your Balls