Yesterday was the premier of Avengers: Endgame. I watched with fascination as Carol Danvers a.k.a. Captain Marvel (played by Brie Larson) stood eye-to-shoulders with Thor, unruffled by the barreling mass of Thor’s axe whispering just inches from her head (This was in the trailer, it’s not a spoiler. I know the penalty of supplying spoilers is crucifixion).

Early this month, Captain Marvel hit 1 billion dollars in the worldwide box office. This is despite the efforts of Jack Posobiec to choreograph a systematic boycott of the movie due to Brie Larson’s comment that press tours are “overwhelmingly white male”. “Man-hating”, Jack calls it. What man-hating?

Also definitely mortified by this development -that a movie with a female superhero lead could smash cinematic numbers as we know it- is Greg Morse from Desiring God. He wrote- among other bullshit- “As I consider Disney’s new depiction of femininity in Captain Marvel, I cannot help but mourn. How far we’ve come since the days when we sought to protect and cherish our women”. According to Greg “Misogynist” Morse, women are weaklings that need constant protection. How dare Marvel portray a strong, independent female warrior that will protect mankind and save the human race?!

The attitudes of Jack Posobiec and Greg Morse speak to one of two things: their insecurity about feminine strength, or the gross undervaluation of women.

I know I’ve just written 200 words about Carol Denvers in the movies, but what I really want to talk about now is Carol Danvers in literature. More accurately, Captain Marvel: Higher. Further. Faster. by Liz Palmer.

This was a time when many men were especially insecure about feminine strength, and when women were grossly undervalued.

Carol and her best friend, Maria Rambeau wanted nothing more than to fly combat in the Air Force. In fact, much of the book is about their struggles as they strive to become the first female fighter pilots.

However, the men will hear nothing of it.

“-would like very much like to apply for your Flying Falcons elite nine-member squad, and in so doing mayhap become the first woman to fly combat.” (Chapter 4)

“… They’ll say that getting into the Flying Falcons won’t change anyone’s minds. That female pilots have been wanting to fly combat since Bonnie’s generation begged for the opportunity decades ago.” (Chapter 7)

“Trying out today wasn’t about showing Jenks what we can do- trying out today was about showing everyone what women can do. So the next time someone like Jenks tries to tell these men that women can’t fly, they’ll all think back to that one day during Flying Falcons tryouts when they got to see the best flier of the lot with their own eyes.. and she was an African American woman who wasn’t even allowed on the team.” (Chapter 17)

I will offer no spoilers as to whether Carol and Maria eventually make it as the first female fighter pilots. However, I will note the character growth that turns a spunky, impulsive teenager into Captain Marvel. The Air Force is her Lian Yu.

IRL (in real life), the United States accepted one of their first female fighter pilot, Martha McSally in 1993. (There are others, but Martha is significant because she eventually became a U.S. senate, and spoke out about sexual rape in the military)

Many many women have followed since.

We have our own Malaysian female fighter pilot star in Mejar Patricia Yapp, the first Asian woman to fly the Mig-29.

And then there’s Lydia Vladimirovna Litvyak, nicknamed the White Rose of Stalingrad, first female ace. Among female combat pilots, her record is allegedly unchallenged to this day.

Women have always flown, many of which have a flair for combat.

But there is always push back. Men constantly need to be convinced of what women can do.

Last month, Jerrie Cobbs passed away at 88 years old, may she rest in peace. Jerrie was the first woman to pass astronaut testing. But instead of making her an astronaut, NASA appointed her a “consultant”. She eventually lamented herself “the most un-consulted consultant in any government agency”.

She wrote in her autobiography, Solo Pilot, that “my country, my culture, was not ready to allow a woman to fly in space.” She went on to live her life as a humanitarian aid pilot in the Amazon jungle.

Note: Sally Ride eventually became the first American woman in space. The first human woman in space is the Russian Valentina Tereshkova, who was valued greatly for her parachuting abilities, which also begs the question- did Russia cheat? 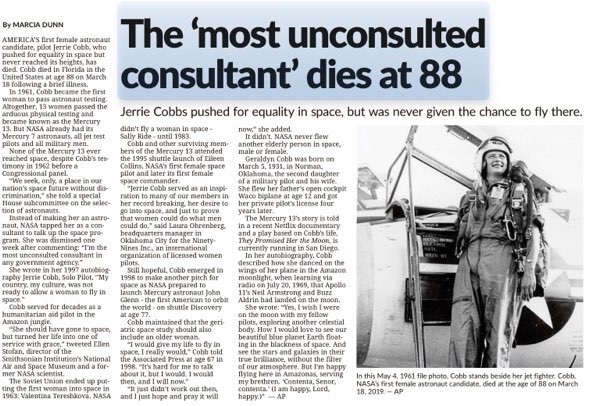 The girls in the Captain Marvel comics faced similar problems as Jerrie. NASA just wouldn’t. Let. Them. In.

The comic strip below is an excerpt from Issue 003, 2012. The female pilots want a shot at space, but they can’t, because jet experience is a requirement. And they can’t get jet experience, because women aren’t allowed into the jet programme. 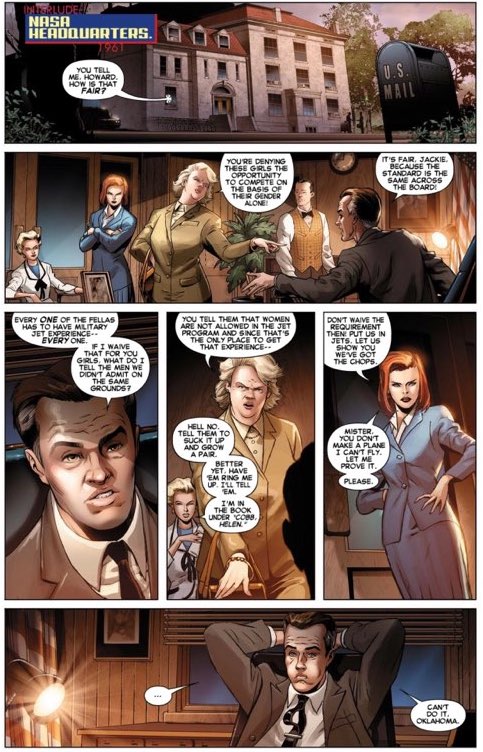 And why aren’t women allowed into the programme? Because they’re not good enough?

I’m often asked, “who are better pilots? Men or women?”

No need to drag gender into this, buddy.

No need to single out one gender…

You patronising son of a…

Line Flying is a Circus
New York City: Where Romantics and Lunatics are Split Hairs