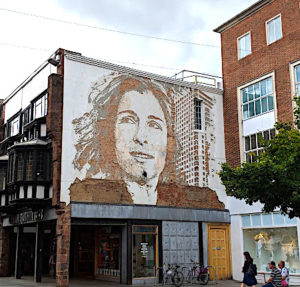 After the adrenaline-charged disposition of London, the city of Exeter feels like Lite FM after a rock concert. Everything moves slower. Ern tells me Exeter is a very fair representation of an English town. She has repeatedly remind me that London is not an accurate representation of the true England. Exeter, on the other hand, is the embodiment of an average English city. Quiet, secluded, quaint… Barely an hour in and I’m actually missing the big city already, may it be London or Petaling Jaya.

Everybody is chiller here, of course. There are less cars, less people, less pollution, but also less coloured people. Unlike London, my Chinese features mean I stick out like a sore thumb. I can count with my fingers the number of coloured individuals I’ve encountered. Having said that, people in Exeter are very nice, like the kind bookshop uncle who gave me a discount even though I didn’t qualify. Not that Londoners are particularly rude, they are simply… distracted.

Exeter dates back to the Roman era. A city wall surrounds the city core where Exeter Cathedral is. Of course, although this cathedral is more notable than others, it is not the only place of ancient Christian worship. In fact, I read that 30% of the city was once churches. Some still exist, in ruins or otherwise, right in the heart of Princesshay shopping precinct. Hold your horses though, Christians, for this reeks of politics more than it does spiritual revival. 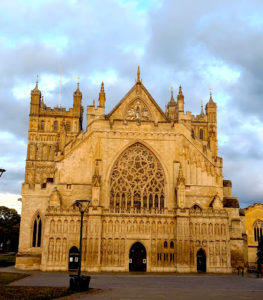 Large portions of the city wall still exist (70% to be exact). Standing next to a 2000 years old wall, I feel a shiver shoot up my spine. This place, so rich in history, hold countless remnants of a bygone age- so chilling, so intriguing- attestation to an archaic time. I’ve known of Exeter’s rich history, but when it fully dawns on me, the revelation doesn’t tickle my comprehension. No, it crashes me like a 10-feet high wave. 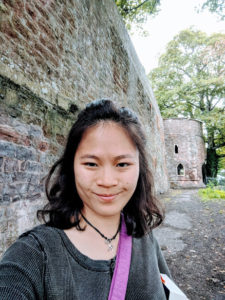 Behind me is the Exeter city wall.

Exeter Castle, also known as Rougemont Castle was mentioned in Shakespeare’s Richard III play in reference to the king’s visit in 1483.

Richmond! When last I was at Exeter,
The mayor in courtesy showed me the castle
And called it Rougemont, at which name I started,
Because a bard of Ireland told me once
I should not live long after I saw Richmond.
~Richard III 4.2.104-112

Of course, the prophecy was bullocks. But that doesn’t rob me of the richness of standing before the very building Shakespeare penned about.

These days, Exeter Castle is available only for private events. It’s not exactly a tourist spot, but that doesn’t stop me from marching through the wrought iron gates and into the compound, confidently jiggling the front door, only to find it lock. 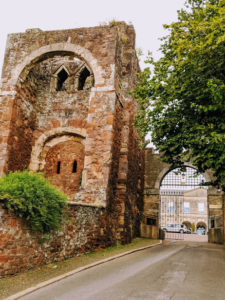 Exeter Castle is also where three alleged Devon witches were trialed and executed in 1682. From what I understand, their conviction and prosecution hinged a lot on hearsay (how dangerous to be female, old and suffer from dementia in olden day England). If that is true, guess what 1682 England and 2018 Malaysia have in common? 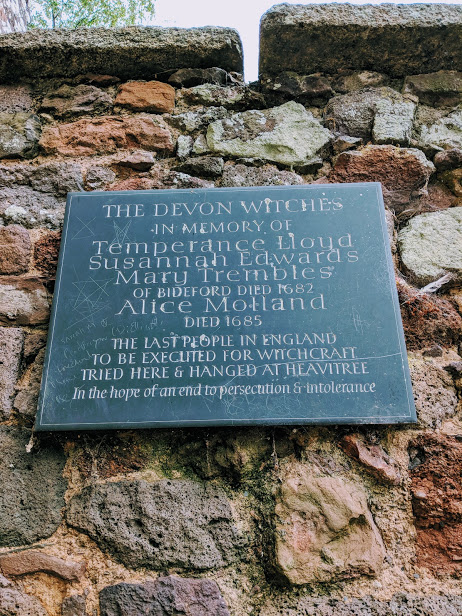 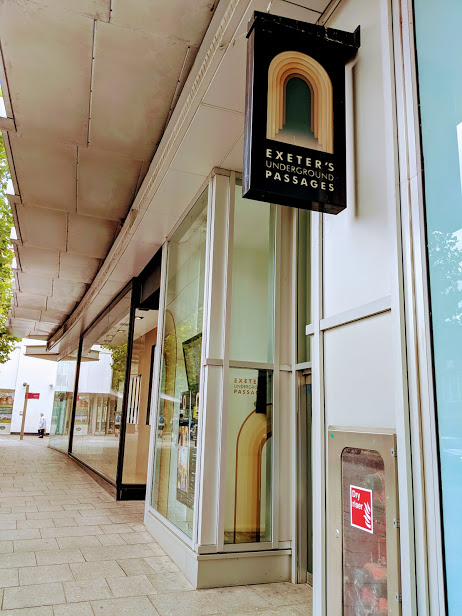 The wall and castle were fascinating, but they have nothing on Exeter’s underground passages. On top of an exhibition detailing the history of the passages, a guided tour takes us through old subterranean tunnels where servants used to carry water for the aristocrats and upper class during medieval Exeter. Poor people drank from wells and stinky, polluted rivers while rich people got cleaned water, carried through lengths of stuffy dark tunnels.

I don’t have any pictures of the underground passages as we were required to keep our belongings in a locker. But that doesn’t matter, because the mental image is still fresh in my mind.

For once, the vertical dimensions that I recently complained about in my previous post played in my favour. When others have to hunch and crouch in tunnels, I walk with my back straight and head high. But the privilege doesn’t last forever. The ceiling dips after awhile, and thank God they made us wear helmets. I clanged my head against the roofing one time too many.

Hat off (helmet off?) to the tour guide who is very well informed and extremely knowledgeable. I was extremely surprise to learn that he’s not local.

The stone walls give way to what looks like brick red plaster. Every now and then, the guide points out channels that branch out to different destinations. I’m not typically claustrophobic.. but when I think of the long hours servants once spent here, I feel a slight anxiety attack.

The passages are so engrossing that I truly do the story telling no justice. Click here for a more exhaustive read!

I will outright admit that after two hours in the Royal Albert Memorial Museum (RAMM), I still have no idea who Albert is. However, the exhibitions were comprehensive and covered a large range of exhibits from old bricks to stuffed elephants. My personal favourite is the cast of a fossil of the archaeopteryx, a bird-like animal that scientists believe prove that birds evolved from dinosaurs. 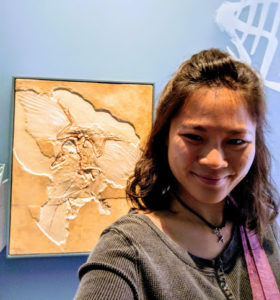 With the Archaeopteryx Fossil Cast

“Here’s the mould of a musical bird long passed from light,

Which over the earth before man came was winging;

That lodges in me still with its sweet singing.

Has perished not, but is blent, or will be blending

Mid visionless wilds of space with the voice that I heard,

In the full-fugued song of the universe unending.” 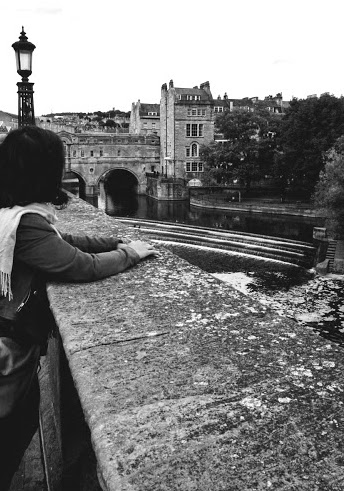 At the Pulteny Bridge in Bath, doing that staring-into-the-distance-pondering-life mandatory holiday shot.

The next day, Ern had a off day, so we journey to Bath for a day trip. After an hour and 10 minutes of train ride from Exeter via Bristol, we arrive at Bath, Somerset, England. Ern remarked beforehand that Bath feels like a different country altogether.

As we stepped into the city, I can’t help but agree. I notice that almost every building is made of yellowish-light brown bricks. According to the internet, this building material is called “bath stone”,  “an oolitic limestone comprising granular fragments of calcium carbonate”. I also found out that Bath is an UNESCO heritage site. 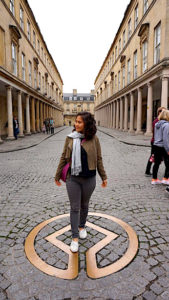 AFTERNOON TEA AT THE PUMP ROOM 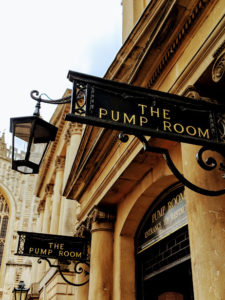 First order of business is afternoon tea at The Pump Room. At this point of time, it’s barely noon. But afternoon tea is a proper noun, and in no way indicates the time of nosh consumption.

In The Pump Room, I feel like a deer in a kampung. The air is posh. Everywhere, people sit at round tables eating finger food and sipping tea.

After about 30 minutes, we are seated. Soon, the food arrives. Every food item come in pairs, presented beautifully on a tiered stand. The bottom tier hold scones with cream cheese and jam. On the middle tier, sandwiches are neatly arranged with an accompanying spread. Cakes, macaroons and other sweet treats occupy the top tier. The waiter describes every food item with professional patience.

At first, I worried that the food will be insufficient, especially since I’m a particularly big eater, and we were legibly starving. I looked at the neatly arranged snacks and commented, “enough meh for two of us?”

Ern shoots me an amused look.

“Eat first then only talk,” she replies.

And it was enough. (We even had to abandon a slice of cake. I will never underestimate plates of British carbs ever again!) 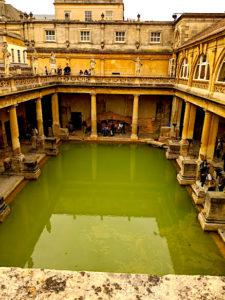 The roman baths are a must see. We pick the one right next to The Pump Room. After paying a small entrance fee, we are handed handheld audio guides that we barely used.

The centre bath is a deep shade of shamrock. Enticing, really. Imagine, roman officials used to wash their naughty bits here. Dipped their birthday suits into this very quadrate of steamy water. Unfortunately, we were not allowed to dip any body part into the water. So we content with pictures instead.

I discovered here that the Europeans are indeed comfortable with nudity. No wonder Melania Trump said in regard to her modelling days (paraphrased) “you are judging me based on your American standards. Remember, I am European”. Screens placed strategically around the facility aimed at giving visitors a sense of the baths in ancient times show a generous amount of bare butts (male and female) and side boobs (female).

According to Ern, the newspapers are not shy with nudity either.

It took my Malaysian mind awhile to digest this. 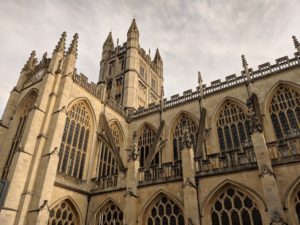 Bath Abbey, the one and only. 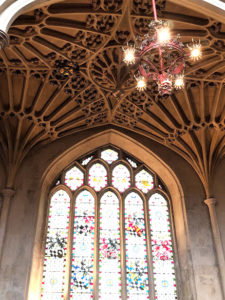 I have nothing to say about Bath Abbey except it was beautiful and thank you for the pews where we could rest our aching feet and take selfies to WhatsApp our parents, captioned “look, pa ma! We’re in church!”

Naturally, we did not climb the 212 steps up the spiral staircase to the top of the church tower. 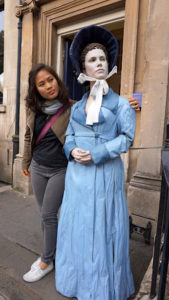 With my zi mui, Jane Austen.

Jane Austen lived in Bath from 1801-1806. In fact, she loved the place so much that she remarked, “Oh! Who can ever be tired of Bath?” in Northanger Abbey. In fact, the gorgeously quaint city played inspiration for 2 of her 6 novels.

Jane wrote her sister countless letters (mostly bitchy), which is how we know so much about her. The Jane Austen Centre documents her life, especially her residence in Bath (she moved around). 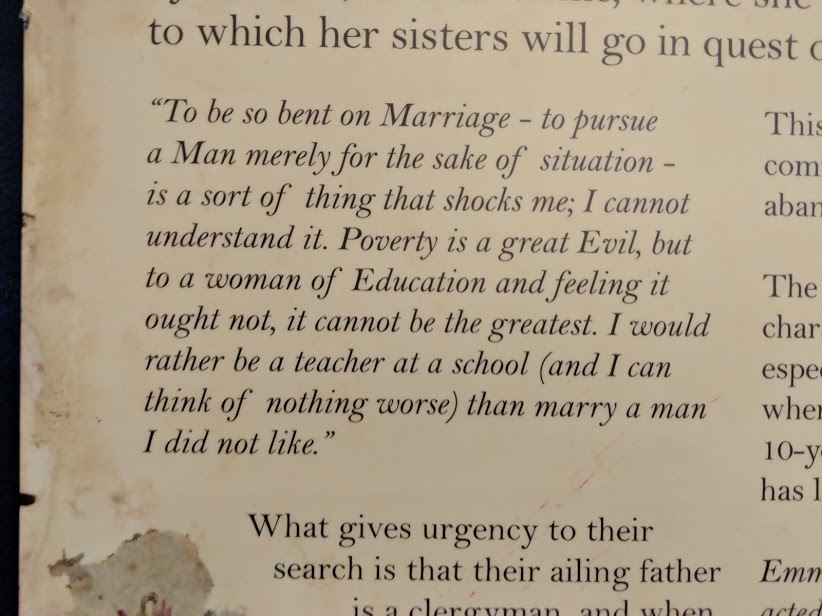 Quote from “The Watsons” by Jane Austen.

A persistent theme in Jane Austen’s literature is women’s desperate need to find a husband. Society teaches women to desire marriage more than it does to men. I read somewhere about a woman who wears a fake wedding band every time she goes for corporate conferences or meetings. She does this to gain respect. Also, an unmarried woman is a “spinster“, while her male counterpart is a “bachelor”. Notice a great imbalance? (Yes, I am married. Maybe that disqualifies me from commenting on this subject.) 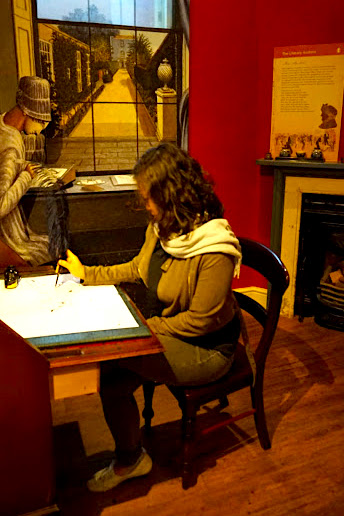 SOME THINGS ARE EVERGREEN

Some things are evergreen: Jane Austen novels, chocolate cake, and the breathtaking beauty of a quaint English city.

As I ride the coach back to London Heathrow Airport, the English countryside blurred in my periphery. Meadows and grazing cows give reign to my serenity. Lone cottages stand in solitary amongst the lush greens. My thoughts stray to their inhabitants- oh, to live away from the fatigue and exhaustion of life. The thought is fleeting.

Later, an Airbus 350 roars down the runway. I fold my legs in 28D to get comfortable, Holly Bourne’s Soulmates snugly in my hands.

We lift off, climbing through the 2nd segment, the 3rd segment, piercing into the 4th segment of flight. The landing gears retract methodically, I notice.

I shift my attention to the inflight entertainment screen before me, anticipating the 13 hours flight ahead.

Just then, the landing gear drops and my ears perk with curiosity. The pilots retract the gear…

And extend it again.

A calm voice sounds over the Public Announcement system. “Ladies and gentlemen, this is your captain speaking. Unfortunately, our landing gear door is not up locked… Therefore, we will return to Heathrow International Airport…”