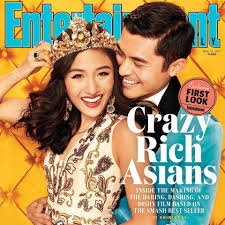 The story tells of American Born Chinese, Rachael Chu and her history professor boyfriend, Nicholas Young (although the movie doesn’t state his profession). One day, Nick invites Rachael to go East with him. East, as in, home to the humid metropolitan island of Singapore. Little does she know- because Nick has been lying by omission- Nick is the freaking Prince William of Asia (or Harry, he insist).

His family is “richer than God”. As soon as they land in Changi Airport, Rachael is thrust into the heart of a Gossip Girl episode, drama lingering at every corner. She navigates the rich people waters, not to mention the disapproving boyfriend’s mother, all that with a huge bulls eye on her back.

IN YOUR FACE, ANG MOR

The first 5 minutes of the movie is what Broady calls “a middle finger to the ang mor”. Eleanor Young and Felicity Leong stumbles from the rain into the Calthorpe in London with young Nicholas Young and Astrid Leong in tow. It’s not mentioned on screen, but they just endured a 16 hours flight from Singapore to send Nick to boarding school. Also, Felicity’s younger sister Alexandra Cheng and her son Eddie Cheng are present in the original story. I typically insist movies stay true to their literary origins, but understand the need for cinematic enhancement and editing. Imprecise storytelling can be overlooked if the plot’s integrity remains unmarred.

Back to that wet and stormy London night in 1995 (1986 in the book). The children tread mud into the 5-star hotel, chattering and looking asian. The hotel staff peer at them from the front desk, disdain evidently palpable on their caucasian features.

Eleanor approaches them, water still dripping off her face. “Good evening, we have a reservation for the Lancaster Suite,” she articulates in perfect english. A look of panic creeps across the manager’s face. We learn from the book that the “Young Party” indeed have a booking for 4 nights, as noted in a leather-bound reservations book that Felicity Young boldly helped herself to, much to the horror of the manager.

The manager is dumbfounded. How would he know the “Youngs” were Chinese?

“We are fully booked,” he shoots at her (they aren’t, and he knows it). “May I suggest… Chinatown?”

After being unceremoniously kicked out of the esteemed establishment, Eleanor calls her husband (or Felicity does actually, if we honour literary accuracy).

A few minutes later, the group march back into the Calthorpe Hotel. The manager is furious. Didn’t he just rid of them?

He’s about to launch round 2 of racism, when Lord Rupert Calthorpe-Cavendish-Gore strides into the lobby. “Ah, Wormsby,” he addresses the manager. “… as of this evening, my family’s long history as custodians of the Calthorpe has come to an end.”

He stretches both arms towards Eleanor (or, in the book, gestures towards Felicity), may I present the new mistress, Mrs. Eleanor Young.”

Wormsby and co. grow ashen, as if a ghost just materialised and presented a cha-cha routine.

Eleanor instructs Wormsby, “do get a mop, will you? The floor is wet.” 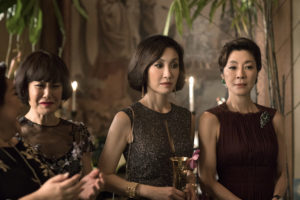 “Let China sleep, for when she wakes, she will move the world.” ~ Napoleon

The movie opens with the above quote. I won’t lie- I was disappointed. Don’t get me wrong, the movie lived up to its hype with a dazzle of asian representation and a mandarin version of Coldplay’s “Yellow”.

No, I was disappointed by the quote. Although the movie centres on Chinese characters in a Chinese culture, this story isn’t about China. The sequel, China Rich Girlfriend may be, but not our current film in question. To be completely honest, the exclusion of other races from this very region is rather disappointing. For one, I was really looking forward to an appearance of the Malay Dowager Sultana of Perawak, Malaysia (no such place exist in real life, your Geography text book didn’t screw up) with her ruby chocker and hijab full of 24-karat diamonds. Other than the gurkhas of Tyersell Park and the Satay uncle, we see ONLY Chinese characters.

However, having said that, for the first time since The Joy Luck Club in 1993, Hollywood produced a movie with an all-Asian cast! This, I hope, will path the way for asian performers in Hollywood, change their perception of us- no more passive, timid hookers. Now, THIS, we celebrate. 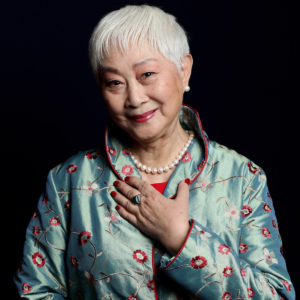 Rachel is an economics professor, AND is lactose intolerant. What could be more Chinese?

She also speaks the language with her mother, who hails from mainland China.

But, that, apparently, is not enough to qualify as Chinese, at least not in Eleanor’s eyes.

Eleanor Young, mother of Nick Young, tells Rachael she’s not “kaki lang” (own kind of people). Rachael is a banana, yellow on the outside and white on the inside. Or as Nick terms in China Rich Girlfriend, “pseudo Chinese”.

In fact, the movie is laden with “suggestions” on how to be a “good Chinese”. Eleanor relays in a l0aded story that she quit law school to marry Nick’s father (untrue to the wordy tome, but convenient to the movie’s plot), because that’s what a “good Chinese wife” does. Unlike the ang moh, Chinese prioritise family over dreams and personal ambition, she says. 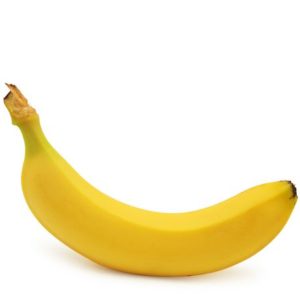 The bananas in Malaysia are concentrated in Petaling Jaya and Subang Jaya. We incline towards western pop culture, relate in English, and typically don’t subscribe to traditional Chinese mindsets. Almost everybody in my inner circle are bananas, or at least, culturally banana.

It’s the only way I knew to live. And then I went to flying school where, to my pleasant surprise, there exist people who don’t live, breathe, and soak in English- people who speak Chinese as a first language.

Obviously, I knew this theoretically before, I just never interacted extensively with one.

At 18 years old, this was exotic. I understand how silly this sounds and how it is a blatant testament to my ignorance growing up, but I’m calling a spade a spade.

So I did what a curious PJ banana girl would do- I dated a couple of Chinese-speaking guys.

I did my best to relate with the primary-school standard Chinese I did know. Not too bad, right? I speak the language. I look like them.

Then one day, an ex’s grandmother enquired of my family’s dietary habits. Your family eat western food at home? she asked. Because, according to her understanding, PJ bananas don’t eat Chinese food- we behave like ang mohs.

This, on top of several other incidents, made me realise that in their eyes, I’m just not Chinese enough. I pinpoint a certain attitude that bleed into emotional exclusion at my expanse.

Then I realised the idiocies in striving for this impossible standard of being “Chinese enough”. Very often, bananas are subjected to this pressure to perform up to an undefined standard of Chinese-ness. Like we have to prove ourselves worthy of our Chinese identity, or else. Individuals that don’t match the absurd standards are boo-ed and forced into a Cersei’s walk of shame.

I loved the books. However, hands down, I prefer Jon Chu’s on screen version of Rachel Chu.

I remember thinking of book-Rachael as placid and reserved. Pragmatic, no doubt, and she refuse to be walked over like a welcome mat. But standing up to Eleanor? Not something Rachael-of-text would do. After the very invasive confrontation by Nick’s grandma and mummy dearest (at Colin Khoo’s wedding in the movie, Cameron Highlands in the book), she flees for refuge in Peik Lin’s whacky arms.

However, there’s a scene, exclusive to the movie, where she confronts Eleanor through a game of mahjong. The dialogue is choreographed to match the game progress. Click here to fully understand the game and it’s relevance. (Article written by Jeff Yang, father of Hudson Yang, who plays Eddie on Fresh off the boat, whose on screen mum is Constance Wu, who plays Rachael in Crazy Rich Asians. Confused yet?) 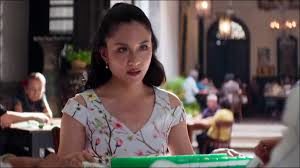 Rachel reveals that Nick proposed marriage to her. At this point in the game, she scores a valuable piece of tile that will contribute to both her and Eleanor’s victory. As she glance at the tiles, she says, “always play to win”. If she marries Nick, he will lose his family; but if he picks his family, he will resent Eleanor forever.

So she’s retracting her participance- she’s leaving Nick. Because contrary to Eleanor’s sentiment, she is a banana that understands the value of family. With that, she discards the valuable tile. Eleanor claims it and wins the game. Rachael then reveals her hand- she could’ve sealed victory with that discarded tile.

With that, she spins on her heel and leaves the gambling house in a cloud of dignity and integrity.

LET’S CLARIFY ABOUT THE FOOD (and the blasphemy) 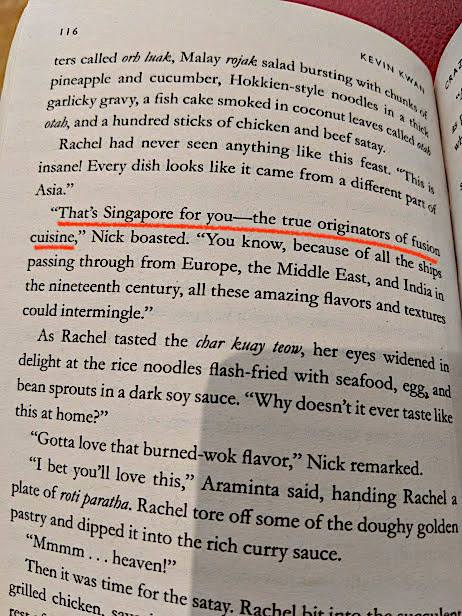 The movie was great, the books even better, but let’s get one thing straight- Singapore is NOT the true originators of fusion cuisine. MALAYSIA has sole ownership over that title.

We are ahead of Singapore in the hawker culture, which is also why Singapore’s move to bid the hawker culture a UNESCO cultural heritage is even more ridiculous than Eleanor and Shang Su Yi’s patriarchal ways. A healthy chunk of Crazy Rich Asians was filmed in Malaysia. Yet, you don’t see us claiming the movie our own, although 2 of the 3 main cast have Malaysian roots (Henry Golding and Michelle Yeoh. On top of Adele Lim, the screenwriter).

We know what is and isn’t ours. 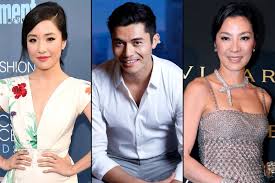 MALAYSIA is the true originators of fusion cuisine.

I’M SORRY, BUT BLASPHEMY OF THIS MAGNITUDE CAN NOT GO UNADDRESSED.