Netflix’s New Thriller “You” Feels Like a Peek Into a Psychopath’s Mind.

There’s this question I ask every guy I date: A girl is at her mother’s funeral when she meets a guy. He’s cute. They get to talking. They connect. She really likes him. A few months later, she kills her sister. Why?

For research, a group of scientist queried different people this teaser. Most people can’t answer. The only ones that can are convicted psycho killers. They answer in a heartbeat: she hopes to reconnect with the cute guy at her sister’s funeral.

This riddle seems like a pretty solid method to weed out psychopaths, don’t you think?

Don’t fault me for not wanting a psychopath in my bed. As a precaution, I ask every guy I date this question. And since I had to share a roof with 4 siblings growing up, I also riddled them, just to be safe.

I am happy to report that to date, there has been no uncovered closet psychopath. 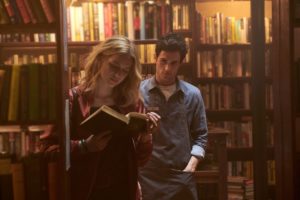 WARNING: CONTAINS SPOILERS OF YOU AND GOSSIP GIRL! CONSIDER YOURSELF WARNED!

Lonely Boy is back! This time as a neurotic yet charming bookshop manager named Joe in Netflix’s new thriller, You.

A lot of the series felt like the annotation of Gossip Girl, and not only because of Penn Badgley aka Dan Humphrey aka Lonely Boy. If you have been living under a rock and are oblivious to the plot of the greatest chick flick of all time, a mysterious ‘Gossip Girl’ reveals titbits about socialites to the public- information that could only be obtained by trespassing, spying, and snooping. The series finale reveals the identity of ‘Gossip Girl’: Lonely Boy. Gasp!

Therefore, You feels like the big reveal that explains the inscrutable bits of Gossip Girl. Once again, Penn Badgley is at it, stealing phones, lurking in the shadows, tailing girls. Except this time, he is not an aspiring writer. Instead, he is a bookstore manager who’s in love with an aspiring writer, Beck.

After they meet cute at the bookstore he works, he is enticed. So, he does what any self-respecting 21st century mortal male will do- he stalks her on social media. Here, he studies her online persona. How she views herself, how she wish others view her. How to become her perfect man.

Then he does one better. He stalks her outside the internet world.

He appoints himself her guardian angel, handling anybody he deems toxic to her.

He stops at nothing to see these individuals “handled”.

From his perspective, he’s a man that will do anything for love.

As an audience, you wince at his twisted logic. But then you begin to empathise with him. You root for him. But you think, this guy is sick in his mind. He’s a danger to society.

Yet, when you see sweet, unsuspecting Beck falling for him, you think, dang, I ship Beck and this psychopathic nut. And that’s when you realise the writers did a kick ass job.

Now, Joe has a neighbour named Claudia. Claudia has an abusive shit-head for a boyfriend. She also has a young son named Paco. As a result of Claudia’s poisonous relationship with dick-face boyfriend, Paco is constantly caught in the crosshairs. Joe is very protective of Paco, sacrificing his dinner to feed Paco, always slipping him books. Paco’s role in the story is obvious. He exist to show Joe’s compassionate side, Joe’s ability for ‘normal’ love. That ultimately, Joe has a good heart, despite his perverted science of reasoning. 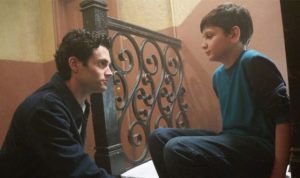 Of course, psychos don’t come out of their mother’s wombs like that. They are turned that way, usually by traumatic events. As the episodes unfold, we learn about a Mr Mooney, owner of the bookstore. We learn about his twisted lessons to Joe. We also definitely see a lot of that overused prop: a transparent, oversized, air conditioned vault for valuable books- and on various occasions- prison for humans.

And then there’s Candece, Joe’s ex, whom we’ve assumed to be dead. But is she really dead?