And then they came for the women. Suddenly, we are plague with the baffling concept of “Biblical womanhood”.

According to Rachel Held Evans in A Year of Biblical Womanhood: How a liberated woman found herself sitting on her roof, covering her head, and calling her husband master, it is “Biblical” for a woman to (pg xix):

Equally bewildered at the concept of “Biblical womanhood”, Rachel Held Evans decided to live one year as a literal “Biblical woman”, or rather, adopt the lifestyle of women in the Bible.

On top of all the traditional wifey-duties, she resolved to call her husband “master” (1 Peter 3:5-6), and camped outdoors during her period (Leviticus 15:19). She also stood at a giant “Welcome to Dayton” sign for 30 minutes with a poster declaring “DAN IS AWESOME!”, since the Proverbs 31 woman’s husband is “respected at the city gate” (Proverbs 31:23).

Her journey brought her to odd places, including visits to a polygamous family, the Quakers, the Amish, and a Quiverfull home. She rented a Baby-Think-It-Over, a doll that cries and poops and eats like a real baby. She made a chain-of-command flow chart: God-Dan-Rachel. She eats only fair trade chocolate, because much of chocolate companies are associated with child slavery. She blew a shofar to usher in the Jewish new year.

I quickly got sucked into Rachel’s adventures.

Soon, it becomes painfully obvious how ridiculous it is for a modern 21st century woman to live like a Bible woman.

Rachel “pays penance” by sitting on the roof since “better to live on a corner of the roof than share a house with a quarrelsome wife” (Proverbs 25:24). Photo credit: A Year of Biblical Womanhood, p17.

One story that haunted me as a kid is that where David, upon defeating the Moabites at war, lay them down in a line and measured them with a length of chord. Every two lengths of them were murdered in cold blood, the third length spared (2 Samuel 8:2). This short story shook my faith again and again well into adulthood. But I’m sanguine about it.

Rachel says she “wish apologists wouldn’t be in such a hurry to explain these troubling texts away, that they would allow themselves to be bothered by them now and then.” (p52).

I let these dark verses trouble me, because I think it helps me put scripture into perspective.

Note: *Bitchy letters– “Cretans are always liars, evil brutes, lazy gluttons.” (Titus 1:12)/ Diabolic wars– Joshua, Judges,1 Samuel,2 Samuel,*pant*1 Kings,2 Kings/ Gory tales– “… sword.. and plunged it into the king’s belly. Even the handle sank in after the blade, which came out his back. Ehud did not pull the sword out, and the fat closed in over it.” (Judges 3:21-22)/ Soft Porn– “Your stature is like that of the palm, and your breasts like clusters of fruit. I said,”I will climb the palm tree; I will take hold of its fruit.” (Song of Songs 7:7-8) etc/ Metaphorical expressions– “You laid out the four corners of the earth, shaped the seasons of summer and winter.” (Psalm 74:14) You are welcome to use this verse as justification for flat earth theories.

It disturbs me when people take the Bible literally at the expense of rationality, like young-earth creationist that present Christians as intellectually deficit. Doesn’t help that their “evidence” include Genesis, the book that suggests God created day and night, plants, and the oceans, all BEFORE He created the sun (Day and night without a sun? Photosynthesis leh? Also, it’s a wonder the waters didn’t freeze over). See how we can NOT take the Bible literally.

Likewise, we can NOT use 4 out of 31,102 Bible verses to teach women how to live. We can NOT draw life lessons from a period in history when women had to bang their father-in-laws for survival (Genesis 38). Bible stories are framed by the narrative of ruthless misogyny. Women lived and died at the hands of the patriarchy.

But for all of its glory and grandeur, the Bible contains a darkness you will only notice if you pay attention, for it is hidden in the details, whispered in the stories of women.” (p62)

In Judges 11:39, Jephthah, fresh from war, triumphant and glowing, promises God a sacrifice of whatever comes out of his house door to meet him. Lo and behold, who appears, if not his daughter, “dancing to the loud of tambourines”. Jephthah tore his clothes and wept. Unlike the Abraham story (where a man tries to kill his son because a voice in his head told him so), this one does not end with divine intervention. It ends with the dead body of an innocent Bible girl.

And then there’s the concubine from Judges 19, who “was thrown to a mob by her husband, gang-raped, killed, and dismembered.” (p64) (This is another story that gave me nightmares as a child. Seriously, why are kids allowed to read the Bible?)

Also there is Hagar who nearly died after getting kicked out of Abraham’s house (Genesis 16), and Tamar who was raped by an asshole named Amnon (2 Samuel 13). 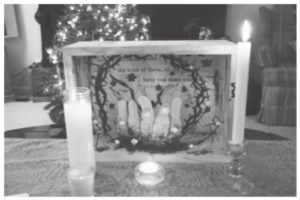 Rachel wanted to honour Biblical women victimised by the wicked patriarchy. So, she and her friend Kristine set up this “shrine” and conducted a ceremony. Photo credit: A Year of Biblical Womanhood, p65.

During Bible times, women were treated as property. And when Paul wrote his letters to the various churches, everybody lived by the sexist Greco-Roman household codes, including Paul. The same codes that we needn’t- SHOULD’NT- self-inflict. That’s why, when people say shit like “women shouldn’t teach”, I wonder if the bugger is a time traveler from ancient Rome. Actually though, according to Rachel, there’s an easy way around this. Simply throw a shawl over your hair and tell bugger you are “prophesying”.

The Bible can scarcely define the rules womanhood.

Those who seek to glorify biblical woman hood have forgotten the dark stories. They have forgotten that the concubine of Bethlehem, the raped princess of David’s house, the daughter of Jephthah, and the countless unnamed women who lived and died between the lines of Scripture exploited, neglected, ravaged, and crushed at the hand of patriarchy are as much a part of our shared narrative as Deborah, Ester, Rebekah, and Ruth. (p66)

I’m going to spoil Rachel’s book for you by stating the ending. She concludes that “the Bible isn’t an answer book (nor) a self-help manual” (p294).

In other words, we mustn’t cherry pick Bible verses and apply them literally.

After one year of “Biblical womanhood”, Rachel concludes that THERE IS NO SUCH THING. There is no free size formula for a woman of faith.

Women of faith span across a wide spectrum of personalities and callings. There are “warriors, widows, slaves, sister wives, apostles, teachers, concubines, queens, foreigners, prostitutes, prophets, mothers, and martyrs.” And they were all called, in their own special and unique way.

Roles are not set in stone. They change with context. Just like leadership.

I believe complementarianism is inconsistent with God’s plan for mankind. If anything, Jesus overturned hierarchy over and over and over again. (Please spare me the “equal in dignity” argument.)

Every woman, regardless of married or single, mother or childless, working or homemaker, breadwinner or not, have the potential to be an Eshet chayil.

To be a woman of valour.