To Which My Brother Laughed: Poignant. Raw. Genuine.

2 lesbians were publicly caned for same-sex relations by the Kuala Terengganu Syariah Court.

Nearly every Malaysian had a reaction.

Me? Before the anger, before the vexation, before the resentment, I cried. Not the gentle sob, a-tear-trickle-down-my-cheek kind.

No, I sat on a bench in my home and bawled my eyes out. The un-glam sort. The kind you can hear another postcode away. The snot fest variety. I don’t know why it hurt so bad.

So, when KLPAC featured a play To Which My Brother Laughed about the caning and the reactions it caused (directed by my secondary classmate, Jit Yang!), I’m like, where do I get tickets?! 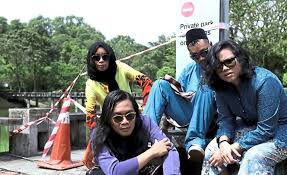 The play opens with melancholy acoustics beating through the theatre. Shh… Diam, the musicians of the hour, are playing one of their hits, Lonely Lesbian. The cast traipse in slowly, shoulders hunched, eyes averted. They do a lap around the stage, making sure to salam the audience in the front row.

Meanwhile, a guy in a blue jersey arrange wooden stools all over the stage, checking them twice, then snapping shots with a DSLR camera. Of course, this is an allegory.

In fact, I discern that most details of the play are allegories. The performance is abstract.

Of course, there are some real in-your-face scenes, like when our heroine wakes up in the morning, kisses her lesbian lover, followed by a very lively performance of another Shh… Diam song I Woke Up Gay. (Click on the link to check out the song. I personally think they’re really good.)

With that context, these performers are not merely entertainers. They are telling a personal story, which is what makes the narrative so much more poignant, so much more raw, so much more genuine.

In some ways, the play is an appeal. An appeal to stand in the shoes of those wronged for their sexual orientation. On the other hand, it is an expression. An expression of longing to be accepted and affirmed.

Gloria, whom I attended the play with, asked for my favourite scene. I replied, that’s an easy one. I love the part when the protagonist blows a cane away. The action is fleeting, over within the blink of an eye. Yet, it is powerful. On top of appeal and expression, this play is a statement. It is to laugh in the face of one’s tormentor. To say, to hell with conformation. Screw you, people who dehumanise me. I choose to be what God made me to be, and in this case, a lesbian.

One scene had the cast playing a game of agree, disagree, or undecided. The actors and band members took turns making statements into the “mic” (a hair brush, really), while their fellow performers either agreed, disagreed, or was undecided. The cast mostly had varying opinions, except for one statement: homosexuality can be cured. Nearly the entire cast rushed to disagree, and they would’ve been unanimous if not for one guy who was undecided.

Heterosexism [het-er-uh–sek-siz-uhm]: Discrimination or prejudice against homosexuals on the assumption that heterosexuality is the normal sexual orientation. –English Oxford Dictionaries

Dear all, we need to stop abusing that carpet.

I love how Jit Yang starts the conversation with this play. And I love how it just gets you, like a sucker punch in the heart.

Love, love, love. All you need is love. Love is all you need. ~John Lennon

Tags: KLPAC, To Which My Brother Laughed