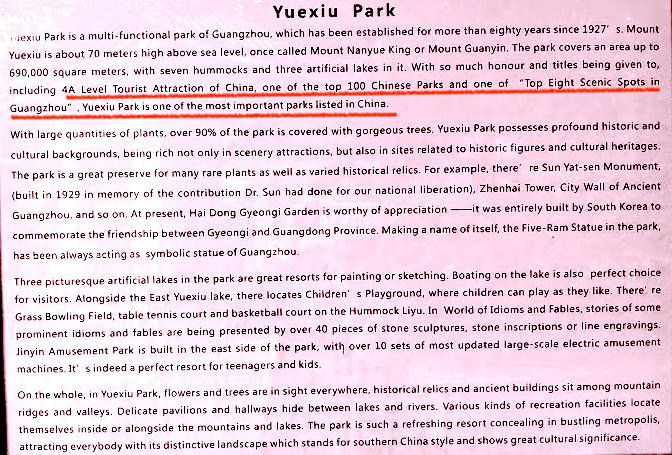 The welcome board at Yuexiu Park. Fun fact: Tourist attractions in China are rated based on safety, cleanliness, sanitation, and transportation, where 1A is the lowest and 5A the highest.

One of the top 100 Chinese parks? Top 8 scenic spots in Guangzhou? That’s a bold claim, me thinks.

I’m reading the welcome board at Yuexiu Park in Guangzhou. Getting here was pretty easy, although Guangzhou’s metro system took some figuring out. There was a guy handing out metro maps. When I asked for an English version, he didn’t even bother looking at me and retorted “no english”. Learn your mother tongue, you loser banana.

But I found my way here nevertheless. Thank you English metro maps.

The main entrance is a short walk from Yuexiu Park Station Metro Station. Judging by the number of tourist loitering about, this is a popular attraction. The park is securely walled in. Its doorway is marked by two solid pillars. There is green everywhere I look. From immaculate grassplots to sleek trees, this park is groomed to impress.

A lake lies to my right, unruffled by the scuffling tourist and raised voices. The water is like a huge mirror- the trees, its bark, the man-made railing- every image echos back. Yellow boats park by the shore, a drop of cheer in a sea of cool colours. 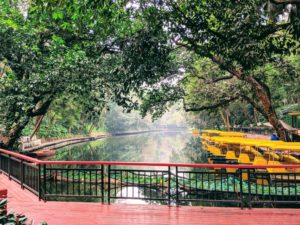 I learn from the aforementioned information board that this park is home to various historical relics and three artificial lakes. Cool, but I’m only here for the museum. And according to the internet, the museum is in the park.

I ask a security guard for directions. He articulates a string of garrulous mandarin. I understand the first sentence or two, and then he loses me. But I continue to nod my head, because nodding your head when an elder is speaking is supposed to be good manners. Then, he points me in the correct direction. This part is very helpful. I thank him and set off in pursuit of the Guangzhou Museum.

I follow a pathway. Every few hundred metres, there is a junction to the various attractions the park holds. Initially, I ignore these. Museum, museum, museum. But soon, I’m distracted. The museum is chucked down my totem pole. Instead, I’m enthralled by the agedness of the place. 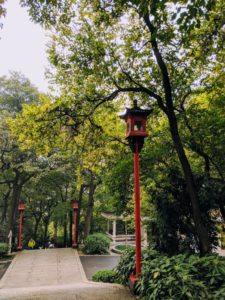 A slight detour takes me to a 600 years old wall. This wall dates back to the Ming Dynasty. It’s the only remaining relic in Guangzhou from that time era. If you squint, you will see the ghosts of 19th century Chinese soldiers taking cover there as British and French battalions attacked during the Opium War. You will also see Sun Yat-sen crouched at the embrasures in 1923, using the spot as a vantage point to spot his enemies and eventually outsmart them.

Touch the walls and feel the spirits of the bygone Ming Dynasty warriors course through your veins. 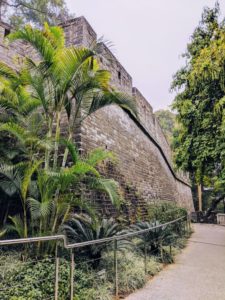 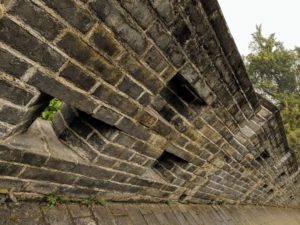 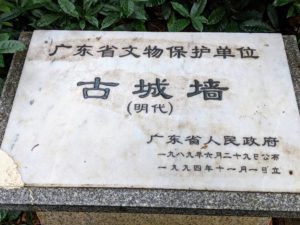 Ancient City Wall. (I think. If you haven’t caught on yet, my Chinese is not the greatest)

And where there are warriors and ghosts, there are legends.

According to folklore, Guangzhou was once a miserable plot of wasteland- barren and infertile. The only life form were human beings (which begs the question of how did the humans survive without vegetation nor livestock? But the logical mind can be a curse, so switch it off now.).

Anyway, the gods took pity on the humans, so five of them came riding down on coloured goats. Each goat carried in its mouth a bag of rice. As soon as the grain packs hit the ground, magic happened. Trees started sprouting, rivers flowing, birds chirping, antelopes sprint across the meadow, fishes perform a synchronised swimming routine in the newly formed lake. It is the garden of Eden. Narnia’s endless winter finished.

The gods grinned at their handiwork and proclaimed their job done. They leave the mortal realm and the five goats turn to stone (the gods left without their ride. Maybe they ordered a Grab car).

And that is the story behind the five rams statue, standing tall at the submit of a gazillion flights of stairs (fine, about 3. I climbed up on my own free will, why am I complaining? The statue’s workmanship is commendable though, I must add.). 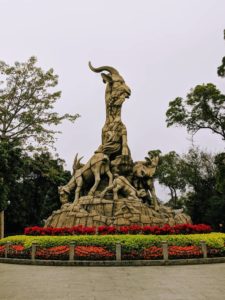 The Five Rams Statue, also within the park.

Further along is the Sun Yat-sen monument. Also called Zhongshan Monument, this memorial was built to commemorate revolutionist Sun Yat-sen. Now, this is a man to reckon with. He was instrumental in overthrowing the Qing Dynasty. His political policy, known as the Three Principles of the People, is something I can stand behind: nationalism, democracy, and just society.

You will have to scale more stairs, 498 to be exact, to reach the monument. But engraved within the monument is Sun Yat-sen’s will. Good for you people that have the ability to consume rows and rows of Chinese characters. 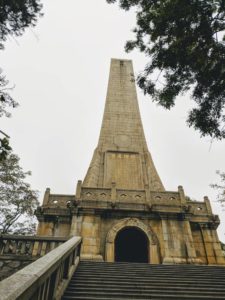 The Sun Yat-sen monument. Once again, also within the park! 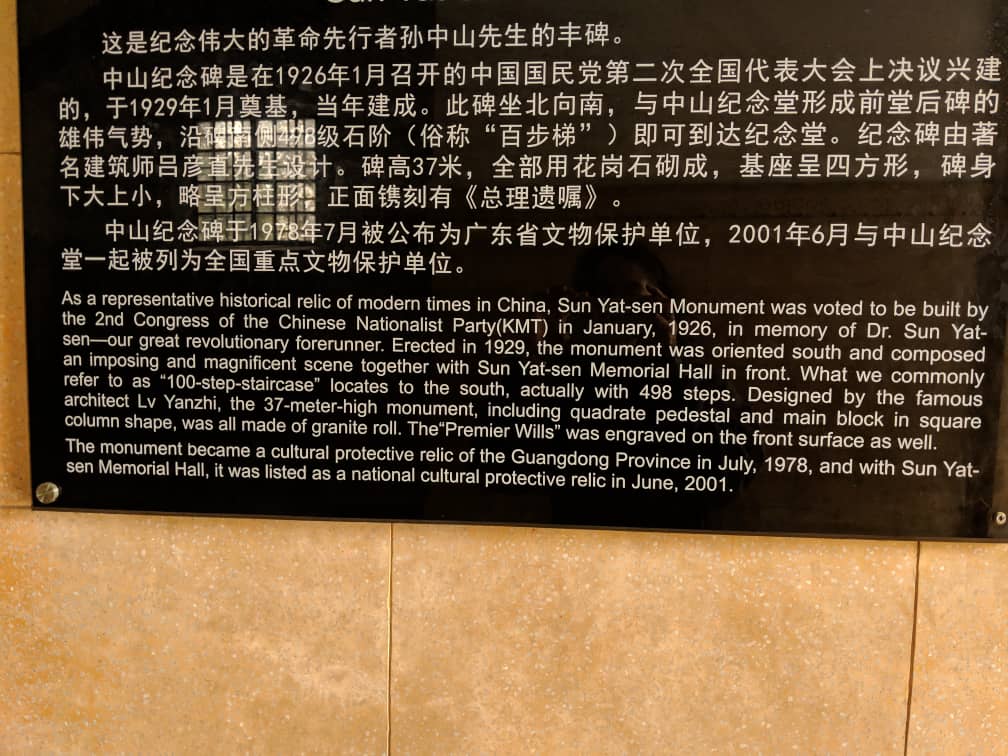 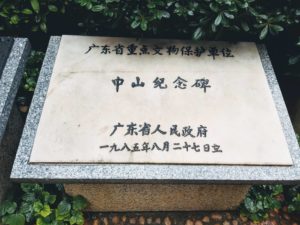 It says “Sun Yat-sen Memorial”. (I’m pretty sure of this one)

Finally, the reason I travelled long and far (40 mins from the airport hotel where the airline puts us)- the Guangzhou Museum.

First and foremost, kudos to the museum attendant who cheerfully led me to the English leaflets. Your professionalism is very much appreciated. *Three finger salute* 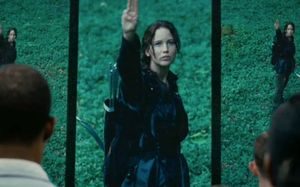 Zhenhai tower (renamed Guangzhou Museum in 1950) is a Guangzhou landmark building. Present day, it functions as a museum. The building isn’t very big, but it packs an exhaustive account of Guanzhou’s rich history. There are cannons and stone tablets and stone household appliances and Ming Dynasty stone lions. There is also an old bus on exhibition (not in stone). 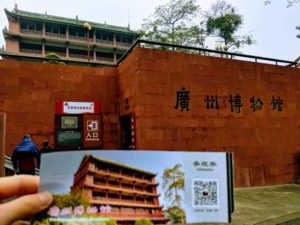 Guangzhou museum. Also within the park. Yes, the park is that big. 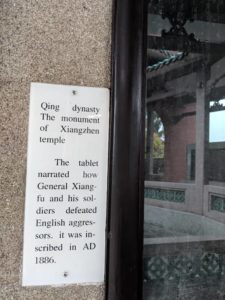 May the record reflect that English aggressors once crumbled at the hands of the Chinese. 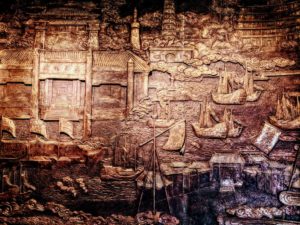 What a big, big park.

Indeed, the park is huge. 212 acres to be exact. I did not expect to be so entertained. And there’s more! The lakes, for one, I did not visit. Nor the tomb next to it.

Uhuh, dead people are buried there. Now you see why a resident ghost is not such an impossible concept? And given the panoramic view of nature’s finest, Yuexiu Park isn’t that bad a place to rest in peace.

Netflix’s New Thriller “You” Feels Like a Peek Into a Psychopath’s Mind.
Do Socialites Fart?: Afternoon Tea at the Majestic Hotel